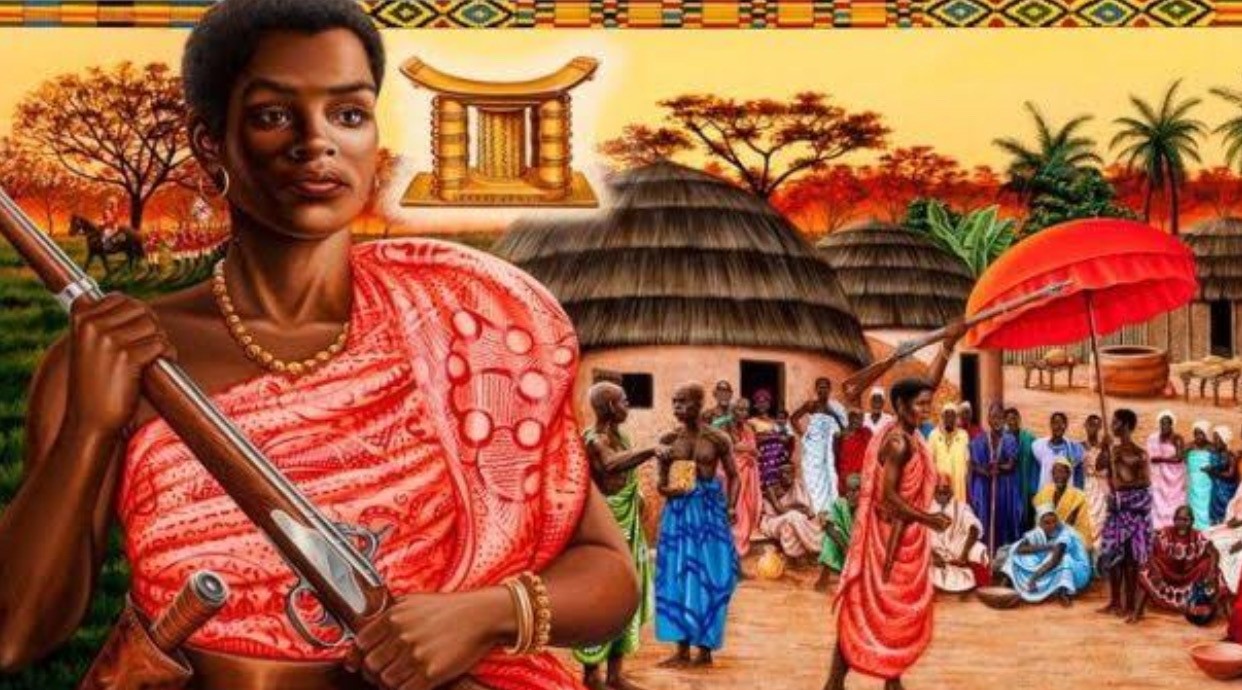 Once upon a time in Africa, great heroes and heroines walked the earth. But today they are no more, and all we have left of them are stories, quotes, legacies, documentaries, statues, memories etc.

Speaking of memories, this week on African History, we bring you one of Ghana’s treasured memories, the story of queen Mother Yaa Asantewaa of Ejisu.

Yaa Asantewaa was a twentieth-century influential Ashanti queen born during the 1840s to 1860s in the Ashanti Confederacy in present-day Ghana. She was a skilled farmer before appointed as Queen Mother by her elder brother Nana Akwasi Afrane Okpase, a powerful ruler at the time, in the 1880s.

It is believed that she was chosen for this title due to the matrilineal aspect of the Ashanti culture and that her elder brother found her fit for the role.

Since the Queen Mother is elected to be the mother of the reigning king, she presents candidates for the Golden Stool (the chiefdom), when the occupant of the Stool becomes vacant, in turn protecting the establishment of authority. Additionally, since the Queen Mother is the main adviser for the King, thus the second-highest position within the empire, she fulfils the role of guarding the Golden Stool.

Yaa Asantewaa assumed her position as queen mother and also continued to play her role efficiently, holding the kingdom in peace until 1896 when the colonial masters came into the land. This was the beginning of nemesis in a land that once knew no trouble.

In 1898, the war between the British and the Ashanti people began. The British had plans to take over the land with intentions to construct the “Gold Coast” colony. While the war continued, Asantehene Prempeh I, King of the Ashanti, and Asantewaa’s grandson Kofi Tene, who was also a powerful leader, was captured and exiled by the British. He was moved to Seychelles Islands, together with some Ashanti leaders, while the British planned to acquire the Golden Stool.

Being the custodian of the Golden Stool, Yaa Asantewaa was ready to do whatever it takes to secure the Golden Stool even if it means putting her life on the line. So, while the rest of the leaders in the kingdom were still thinking and trying to find a solution to stop the colonial masters from taking over their land, Yaa Asantewaa went ahead of them, she stood her ground and gathered the Ashanti army together for war. The Anglo-Ashanti wars’ fifth and final war against the British became known as the Yaa Asantewaa War of Independence (or the War of the Golden Stool), which began on March 28, 1900, with Yaa Asantewa as Commander in Chief.

While the people conflicted with the British for the sake of securing their land and the Golden Stool, one of British representative Sr. Frederick Mitchell Hodgson, in disregard sat on the Golden Stool. When Hodgson’s act became known, Yaa Asantewaa led the troops to war, which resulted in the death of 1,000 British and allied African soldiers and 2,000 Ashanti.  Both totals were higher than the deaths from all previous wars between the Ashanti and the British combined.

When it seems like the warriors were given up hopes in the prolonged war, to inspire the leaders of her community, Yaa Asantewaa announced that the women would go to war if the men of the kingdom would not defend the people. This both invigorated the men and challenged traditional gender roles. She led the rebellion and became an image of strength and resistance. Unfortunately, she was captured during the rebellion and exiled to Seychelles, where she died in 1921.

Till date, her story is a powerful reminder to the people of Ghana, who are inspired by her impactful actions—empowering the Ashanti Kingdom and her tactics against the British army. In her honour, they built a museum in the Ejisu-Juaben District of Ghana, in August 2000. Also, an achievement award titled the “Nana Yaa Asantewaa Awards” (NYA) is given to honour women who uphold the values and leadership of Asantewaa.

Twitter to launch a Cleaner Interface for Threaded Conversations