Home African History The Wealthiest Emperor Once Lived In Africa 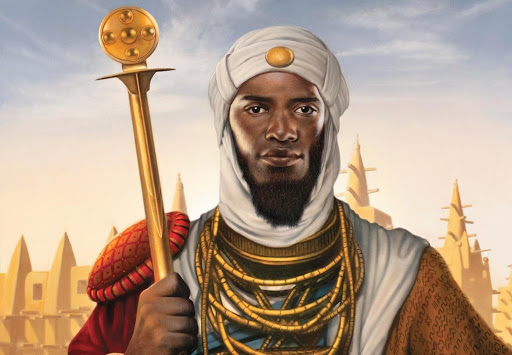 Have you heard about Mansa Musa? I bet you have, but if you haven’t let me take you through a journey on a short story about the richest African emperor that once lived.

His name is Mansa Musa, from Mali, which is today described as a landlocked country in Western Africa that shares boundaries with Niger on the east, Burkina Faso and the Côte d’Ivoire on the south, Guinea to the south-west, Senegal and Mauritania to the west, and Algeria to the north.

However, Mansa existed during ancient Mali (before the country’s independence and the coming of white men into Africa), ‘as the richest man of all time’ a title he earned because of his stupendous wealth which remains too high for numbers to quantify.

“Musa’s riches were so immense that people struggled to describe them,” says Rudolph Ware, an associate professor of history at the University of Michigan.

This great African emperor was born into royalty in the 1280s. His older brother, Mansa Abu-Bakr, ruled the empire until 1312, he went missing on a voyage he took by the sea on an adventure to find the edge of the Atlantic Ocean. According to 14th Century Syrian historian, Shibab al-Umari, Abu-Bakr was obsessed with the Atlantic Ocean and what lay beyond it. So he took a fleet of 2,000 ships and thousands of men, women and slaves and they sailed off but never returned. Although some historians, like the late American historian Ivan Van Sertima bought the idea that they reached South America. But there is no evidence of this.

However, Abu-Bakr’s disappearance landed Mansa on the throne who served as deputy while his brother was the ruler.

When Mansa ascended the throne, the Kingdom was flourishing having plenty of natural resources like Gold and salt. And under Mansa’s rule, the empire flourished, even more, it continued to expand and grew significantly.

History recorded that Mansa annexed 24 cities, which are some parts of West Africa, from the Atlantic coast to the central trading hub of Timbuktu and parts of the Sahara Desert. The components of West Africa which the empire stretched into are places we now know as Senegal, Mauritania, Mali, Burkina Faso, Niger, The Gambia, Guinea-Bissau, Guinea and Ivory Coast. With such large landmass the empire became greater and as it grew so was its economy which was mostly dependent on Gold and salt. His Kingdom was the largest producer of Gold during and after his reign.

At the early time of Mansa’s reign, the European nations were struggling due to raging civil wars and lack of resources. So, Mansa was indeed the richest emperor at the time. However, his greatness was unknown to the outside world until his journey to Mecca.

Mansa, a devout Muslim set off to Mecca for his Hajj pilgrimage with a caravan of over ten thousand men. His entourage included an entire royal court and officials, merchants, camel drivers, griots (entertainers), soldiers and maidservants, as well as a long train of goats and sheep for food.

Although records of the exact number of people who accompanied the emperor on his journey are scarce, history with reports from passersby and onlookers said they passed through the Sahara Desert and Egypt with elaborate convoy marching alongside camels and horses carrying hundreds of pounds of Gold. It was not a sight to overlook.

When the caravan reached Cairo, the people could not believe their eyes; they reverberate about the wealthy Malian emperor and his expanse of Gold for more than a decade after the emperor had left.

Meanwhile, Mansa was too generous with his Gold that his three-month stay crashed the country’s economy as a result of fall in the price of Gold.

Mansa spent a lot of Gold during his pilgrimage. According to Lucy Duran, a professor in the School of African and Oriental Studies in London, she notes that Malian griots, who are singing historian storytellers, in particular, were upset with him.

While Mansa returned from Mecca, he passed through Egypt again, and some historians said he tried to revive the country’s economy by removing some of the Gold from circulation, borrowing it back at extortionate interest rates from Egyptian lenders. On the other hand, a few said that the emperor spent so much that he ran out of Gold.

However, it was this excessive generosity that exposed the emperor and his people to the world; else, his greatness would have been known only in his territory.

The emperor is not only known for his generous gifting of Gold but also for his investment in infrastructure majorly in Timbuktu and Goa which he began after his return from Mecca. The emperor returned from Mecca with several Islamic scholars, including direct descendants of the prophet Muhammad and an Andalusian poet and architect by the name of Abu Es Haq es Saheli, who is widely credited with designing the famous Djinguereber mosque.

He used his wealth to build schools, libraries and mosques. Timbuktu soon became the centre of attraction which was where Mansa built the Djinguereber Mosque, a famed place made of mudbrick and wood that has stood the test of time, remaining active for more than 500 years. People travelled from far and wide to study at the place which is today known as the Sankore University.

And Emperor Mansa is often credited with starting the tradition of education in West Africa.

By the late 14th century, the emperor was drawn by a Spanish cartographer Abraham Cresques in the 1375 Catalan Atlas, an essential resource for navigators of Medieval Europe. The atlas portrayed the emperor sitting on a throne with a gold scepter and crown, holding a gold nugget.

After the death of Mansa in 1337, his sons Mansa Maghan took over the empire.