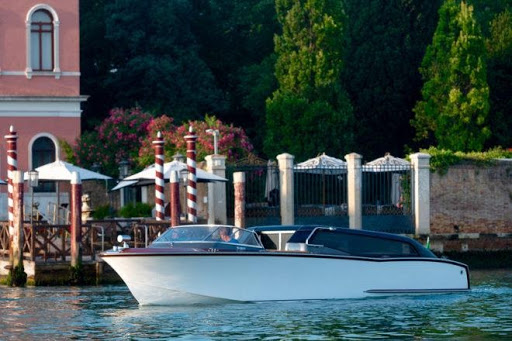 Venice-based studio Nuvolari Lenard’s 14-seat luxury hybrid water taxi has ‘obtained complete approval by the classification bodies’ after a test period of about a year.

Built at Cantieri Vizianello in Venice, the 9.2m luxury water taxi was conceived by Carlo Nuvolari and Dan Lenard, who organized a forum at last year’s Venice Boat Show to discuss potential designs for a hybrid luxury watercraft that could help solve the city’s pollution problem.

“As Venetians, Dan and I feel a strong connection with the city and have experienced first-hand the damage that is being caused to its delicate structures, through air and noise pollution as well as physical erosion,” Nuvolari said.

“We felt that it was crucial to address the problems facing our beautiful hometown and that Nuvolari Lenard was well placed to lead the charge in finding a solution.”

The new luxury water taxi is focused on the use of green technology and uses a hybrid engine that combines electric propulsion, for use within Venice’s low-speed waterways, and diesel propulsion, for higher speeds to and from the airport. Cantieri Vizianello developed the mechanical and electronic coupling system.

“Diesel-electric hybrid propulsion seemed to be the most efficient solution for Venice’s particular requirements,” Nuvolari said.

“Short battery life is a common concern for many hybrid propulsion systems. However, in Venice, the water taxis make regular trips to the airport in open water where they travel at higher speeds using diesel, which gives the batteries time to recharge, even if not completely, for when the vessel returns to the low-speed confines of the city’s waterways. In these areas, it will only draw on the stored electric power.”

Nuvolari Lenard has received a request for the water taxi to be used as a limousine tender for a superyacht client but is also hoping the design will eventually be mass-produced and set an example within Venice.

“We hope that this progressive model for transportation in the city will change the mindset of the historically conservative transport companies in Venice,” he said.

“Although the technology onboard is ultra-modern, we made every effort to respect the stylistic heritage of the classic water taxis for which Venice is famous, and so the new designs use traditional wooden materials with some modernization.

“Nuvolari Lenard is very proud to be doing something for Venice, as it is so close to our hearts and a stunning place that we want to help preserve for future generations.”

On the Frontline for Maternal and Neonatal Safety