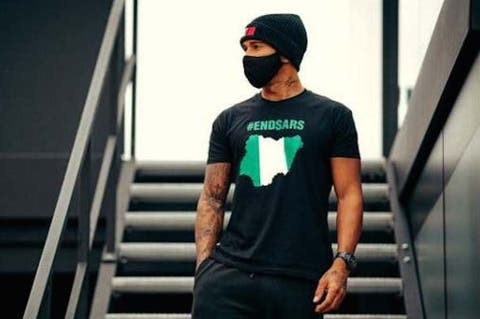 He wore a branded T-shirt with a green #ENDSARS inscription written boldly on it alongside the Nigerian map designed readily in its colours, green and white, to support the movement during a pre-race television interview featuring at the Portuguese Grand Prix on Sunday, October 25 2020.

As he lent his voice noting the importance of the movement, he stated to that Sky Sports: “I’ve got to show this.”

Such support from a well-known figure in the world is a welcome one for the movement of Nigerian youths who seek to end a pattern of police brutality and injustice in the country. It is not the first time Hamilton is lending his voice to such causes as he was a strong voice in the fight against racism. He joins a list of world figures who are supporting the peaceful demonstrations by Nigerians demanding better of their country.