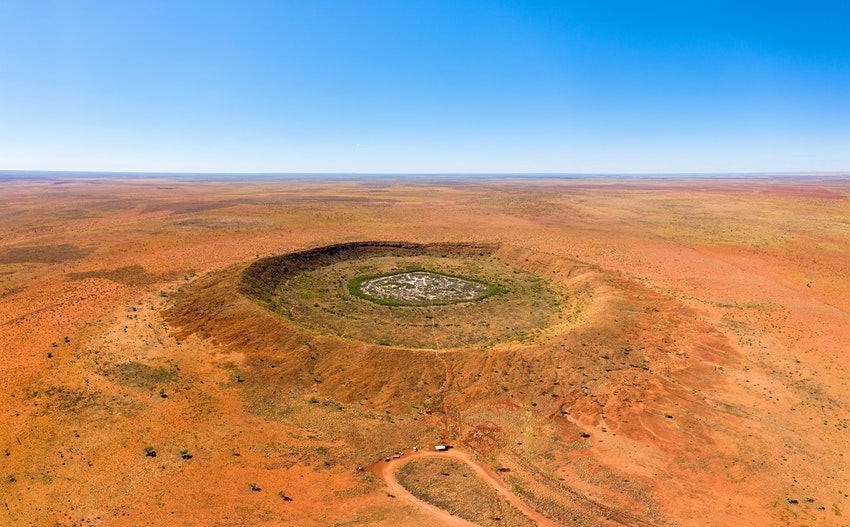 Buried deep in the ground of the outback of Western Australia geologists have discovered the scars of a large 100 million-year-old meteorite crater.

Signs of the meteorite crater were first detected while a drilling company was digging for gold in private gold fields south of Ora Banda, a former mining town turned ghost town in Western Australia’s remote north. With a diameter of about 5km (3 miles), the crater is about five times bigger than Wolfe Creek Crater in Kimberley (one of the largest meteorite impact craters discovered in Australia), according to reports in the Guardian.

The crater isn’t visible from the surface, but a team of geologists led by Perth-based geophysicist Dr Jason Meyers have been able to study it by examining sediment samples, and by carrying out electromagnetic and gravimetric mapping which measure the strength of the crater’s gravitational field. The team believe the meteorite struck about 100-million-years-ago, but further research is required.

“In geology, you tell someone you found a meteorite crater and they immediately roll their eyes and are very sceptical because they’re so rare,” Dr Meyers told ABC. “But when you see shatter cones you know because they only form in nuclear blasts or meteorite impacts.”

This discovery is only part of the story. The next big question geologists want to answer is what kind of effect the crater’s impact had on the planet. They’re hopeful that their studies will lead to more discoveries and help them predict when the next meteorite will strike Earth.

The world’s largest known impact crater is the Vredefort Dome which struck the Earth about two billion years ago. With an estimated diameter of 190km (118 miles), it would dwarf the Ora Banda crater. It’s located in Northern Free State, South Africa and is a popular tourist site after being declared a UNESCO World Heritage Site in 2005.

Finding Comfort in Your Own Skin