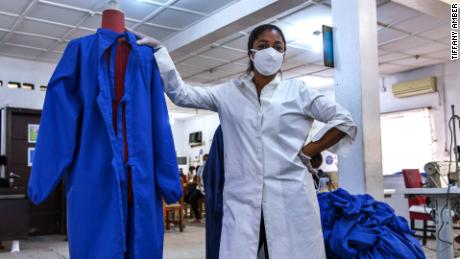 Folake Akindele Coker, the CEO of fashion designer brand Tiffany Amber has swapped couture for the production of PPE’s.

To make this shift possible, Coker said the company initially had to procure over 15 tons of fashion design raw materials. These materials included about 90,000 yards of clothing material, approximately one million yards of thread, and 300 yards of elastic materials.

The fashion design company had to secure all these materials in time just before the local and international borders were shut in Nigeria. The closed borders led to abrupt spikes in prices because of the sudden increase in demand.

In mid-July, the World Health Organization estimated that Nigeria had over 30,000 coronaviruses confirmed cases, with only South Africa having more patients in Africa.

The economic impact of COVID-19 led to less consumer spending.

Coker saw this as an avenue to help with the fight against the virus, ‘Our expertise in garment production helped facilitate this shift to bridge the gap in the supply of medical apparel,’ she said.

The push for the production of PPE has been a global trend. Most private companies worldwide have modified their production plans to help meet the soaring demand for PPE.

The current Coronavirus has pushed Africa into a recession. The first in over 20 years. The recession has massively impacted some of the most significant economic drivers on the continent, such as agriculture, manufacturing, and energy.

Furthermore, the global luxury market is expected to shrink by as much as 30% this year. This is because of the abrupt decline in consumer spending because of increased job loss.

Efforts to produce and source for PPE gears in Nigeria primarily depend on private corporations who have to work with suppliers. In a bid to remain solvent, Coker says her company is working alongside major financial institutions to fund these PPE’s production.

According to Cooker, ‘shifting to PPE production has had an unlikely silver lining: job creation. Since March, we have managed to grow from 100 employees to a staff of 300.’

Currently, Cooker says her company is not anticipating a return to traditional couture in the foreseeable future. “One mind is thinking about tomorrow morning, and the other mind is processing the next two years,” says Coker. “Subconsciously, I find myself drifting away, putting together the next Tiffany Amber collection.”