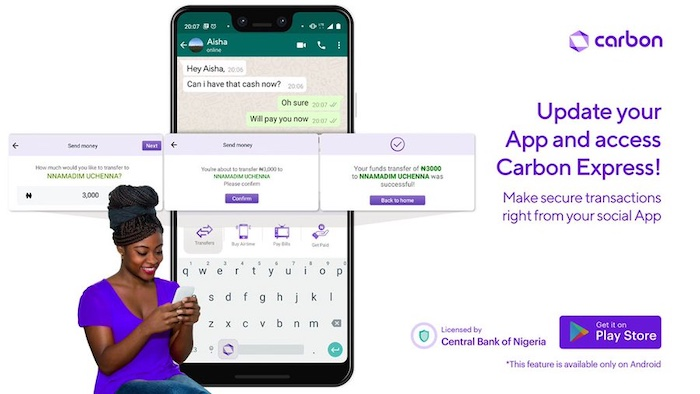 Carbon, a leading digital financial services company in Nigeria, in an effort to improve the service experience for its customers, has launched Carbon Express. A keyboard extension that allows customers to access its services, and securely carry out transactions without leaving their social apps

Carbon Express enables users to initiate and complete transactions such as transfers, and bill payments from the keyboard without launching the Carbon App or leaving the current app that they are using. Instead, they will be able to access services from the touch of their keyboard, enabling quicker Instagram or Whatsapp commerce.

Carbon Express maintains the same PCI DSS compliant model of encryption, authentication, and security as Carbon’s other services, thereby guaranteeing the security of all transactions. The feature relies on the keyboard technology of smartphones to facilitate transactions. The technology adds a unique Carbon branded button to the customer’s smartphone keyboard, which they can tap anytime to perform transactions. Think of sending an emoji, but this time it’s real cash.

“This is a step in the right direction for Carbon as we aspire to go everywhere with our customer,” says Chijioke Dozie, CEO of Carbon. “People are spending a lot of their time on social messaging apps like Facebook, Twitter, Instagram, Whatsapp, etc., and It is only natural that some of the conversations they have on these platforms have to do with money. With Carbon Express, we are merging social conversations with financial services – meeting customers where they spend a lot of their time.”

Last week, the company also introduced Carbon Score, it’s loyalty scoring system that rewards customers with benefits such as Healthcare, additional referral bonuses as well as exclusive first access to some of its new features. “We want to continue to build a mutually beneficial relationship between our company and our customers and what better way than to reward their loyalty and discipline” Dozie adds.

Carbon Express and Carbon Score are the latest on a long list of market-leading innovations from the company. Carbon (formerly Paylater) pioneered instant lending in Nigeria. It was the first mobile app to provide access to credit digitally and without requesting individuals to present the documents and collateral traditionally associated with accessing loans. Earlier this year, Carbon introduced its iOS app and USSD (*1303#) service following on from its launch in Kenya in December 2019. It also announced its Disrupt Fund, a $100,000 Pan-African fund to address the lack of capital for African tech startups.

Distributed by APO Group on behalf of Carbon.

Blooming in a Pandemic